230. Where Angels Fear to Tread 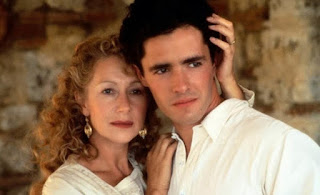 The title "Where Angels Fear to Tread" sounds like the name of a sappy Rock Hudson movie, but this novel is anything but sappy. I was particularly pleased about how enjoyable this was, because I've read Howard's End and found it terribly dull. Maybe Forster is like Henry James and will get progressively duller as the years go on. We'll see!

Newly widowed Lilia leaves her young daughter with her mother-in-law, Mrs. Herriton, to travel to Italy with her friend, Ms. Abbott. Ms. Abbot has been charged by the Herritons to keep Lilia in line abroad, only it doesn't go so well. Lilia falls in love with Gino, a short Italian who is *gasp* the son of a dentist. Mrs. Herriton sends her son, Phillip, to Italy to try to stop the match.

Speaking of Henry James (why can't I stop thinking about him? I hate him! It's my dating life all over again), this novel has a similar set up to The Ambassadors, but is much better done. Maybe it was because Forster was younger than James was when he was writing, but his observations about Europe felt less judgmental. It was like he did not blame his characters for any of their behaviors, so deep was his understanding of their motivations. Of course, he had to slip in the occasional off base comment about women here and there. Apparently, I am supposed to have "a woman's pleasure in cleaning anything." Yes, what a simple joy it is to scrub a toilet. It makes my ovaries sing.

I also appreciate his brevity; he didn't waste any time telling his story. A very good novel, and I'm excited to see what else Forster has in store.

Published when he was 26. Okay, now you are just showing off.

UP NEXT: The House of Mirth by Edith Wharton
Posted by Amanda at 6:49 AM