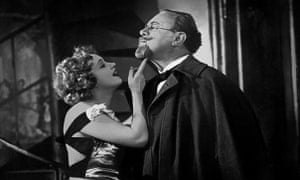 Many, many moons ago I watched The Blue Angel for my movie blog, which is the film adaptation of this novel. I don't remember much about the movie except Marlene Dietrich being a sexpot, so I really didn't know what to expect when I started this. I think I would assign more importance to the movie than the novel.

Professor Raat is a cranky widower who is known as "Unrat" among his students and colleagues (the German word for garbage). He tracks down Rosa Frohlich, a night club dancer, intending to tell her off for "corrupting" his students. Of course, this does not turn out how he expected.

I'll start by confessing that my translation of this one probably wasn't the best. Since the libraries are closed, I have been living off of pdfs, which is exactly the kind of devil-may-care, cowboy lifestyle I am getting too old for. I am sure the sentences were less awkward in German.

That being said, I did feel like the characterization was rather thin. I didn't feel like I got to know any of these characters. I know Mann's focus was wider than that, but Rosa was nowhere near as striking a character as, say, Nana. Side note: I know I should stop comparing every author to Emile Zola, but I can't help it.

Overall, not terrible, but entirely skippable.

The Blue Angel was shot simultaneously in English and German. The German version is considered the better film.

The Nazis burned Mann's books in 1933, as they were "contrary to the German spirit." Indeed.

UP NEXT: Young Torless by Robert Musil. Another one that doesn't ring any bells.
Posted by Amanda at 3:13 PM