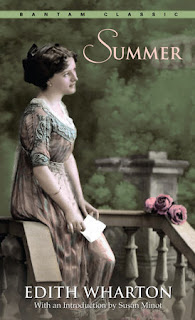 We've hit one of the odd patches on the List where I've read the next five or so titles. I'll probably space out the next few reviews for the month of February, since I always try to read love stories this month. Yes, I am a slave to theme months.

Charity was born to poor parents from "up the Mountain" and is taken in by the widowed Lawyer Royall. His kind gesture, of course, is predicated on Charity eventually having sex with him. Charity gets a job at the library in hopes to save up money and leave Lawyer Royall's care. One day, an architect, Lucius Harney, visits the library to mansplain how to do her job to her. She falls for him, failing to recognize that she's in an Edith Wharton novel, so she really shouldn't.

Okay, if I was forced to live in New England during this time, I can't think of a sweeter gig than working at the library. And then a hot guy comes along, and builds better ventilation for you and your books? Let's just say I don't blame Charity for falling for this guy. It's harmless to be in love with a fictional character, right?

It's odd how the character of Lawyer Royall is handled. As far as I am concerned, he is a Lovelace-level villain, but he's treated with a lot of sympathy here. It's strange how Wharton can be so seemingly ahead of her time in some ways, but then so traditional in other beliefs. She would have been an interesting lunch date, that's for sure. And maybe I could ask her if Lucius was based on a real person and if said person is available.

Ahem. In conclusion, I love Wharton.

Controversial for its time, which is one of the reasons it's a lesser known novel.

UP NEXT: The Shadow Line by Joseph Conrad.