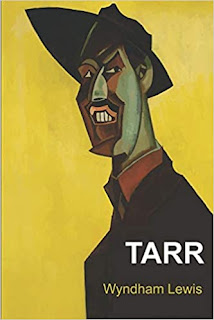 My new tracking system for 1001 reads allows me to see which books I am passing over across all editions. Since I am following the original List, it feels like I am just skipping all the entries not written by white Englishmen. It might be time to shake things up soon. For now, we will forge ahead with the original List, pre-non Western makeover.
The novel is set in pre war Paris, and follows the lives of two artists. The main character, Tarr, is thought to be based on Wyndham Lewis himself. Tarr is fed up with rules, conventions, and anything resembling civilization. His foil is Kreisler, a violent German and general failure as an artist. Their lives are full of missteps, duels, and truly terrible approaches to bed women.
This is my first Lewis novel, and wow, am I impressed. Lewis is a master of writing punchy sentences. I was delighted with many of the vivid and humorous descriptions in this novel. I was less interested in the world views that the two artists were meant to represent. It felt like the kind of nihilistic philosophizing that the Russians have already beaten to death by this point. But I loved his language, and was content with his descriptions of just about anything.
There are many more Lewis novels on the List (he is an Englishman, after all), and I am looking forward to it. That is, if he doesn't get too soapbox-y.
RATING: ****-

Interesting Facts:
The first American edition used equal signs instead of periods, in order to introduce painterly strokes into literature. Oh, brother.
Lewis wondered later if he had anticipated the personality of Hitler with the character of Kreisler.

UP NEXT: Night and Day by Virginia Woolf. Another great pick.
Posted by Amanda at 3:11 PM