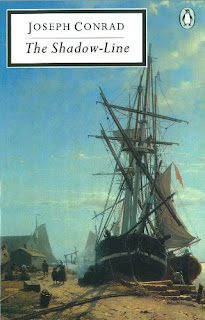 I had been keeping track of my progress on the 1001 Book List using an app. Unfortunately, the app doesn't work on my new phone, so I've resorted to using a Google Doc. The Google Doc contains the titles across all editions, which makes me think I should just start over with the higher total. If anybody wants to check out my progress, or wants a Google Sheet of their very own, drop me a line and I will send you a link.

I'd much rather talk about List strategies than this novel, but the beat goes on. A young sea captain is eager to begin his first command, which is almost as dangerous as having one last shift before retirement. His ship experiences nothing but trouble, including disease, insanity, and poor weather conditions.

Once again, the concept of this novel is more interesting than the execution. There are four other Conrad novels on the List and this is easily the weakest link. I thought the descriptions were dull and the characters weak. Maybe his heart wasn't in it anymore.

There are other authors that I am much more eager to show the door, but I was getting a little tired of Conrad's style. So ahoy Conrad, and thank you for coming.

Andrzej Wajda made a 1976 film adaptation of the novel (Smuga cienia).

UP NEXT: The Return of the Soldier by Rebecca West. This is a quick read.